skip to main | skip to sidebar

I just finished a very compelling book on the effects of Indian war in the middle colonies during the eighteenth century -- Our Savage Neighbors by Peter Silver. The basic argument is that the paralyzing fear wrought by the possibility of Indian attack during the Seven Years/French and Indian War (1754-1763) was manipulated by polemicists in Philadelphia and elsewhere to perform a variety of functions. Master manipulators like William Smith developed what Silver calls an "anti-Indian sublime," in which decontextualized descriptions of Indian "murder" were used to unite the normally fractious groups of European settlers (including Irish Presbyterians, German speakers, and others - none of whom got along) into a category of "white people." "The white people" were united NOT, as we might think, by their "race" (racial theories were a regrettable product of the 19th century) but by their shared suffering in the face of the Indians.

Not all people we might now consider to be "white" were counted as the poor, white sufferers in the 18th century. The Quakers, who still retained a significant (though ever dwindling) amount of political power in the mid-18th century, were vilified because they attempted to maintain friendly relations (through their Friendly Association) with the Indians. They were denounced as bigots who sided against "the white people" in favor of the Indians.

Polemicists published pamphlets with cartoons like this one from 1764, entitled "The German bleeds and bears ye fur," (from The Library Company of Philadelphia) that attacked the Quakers for helping Indians over "the white people" who had suffered at their hands: 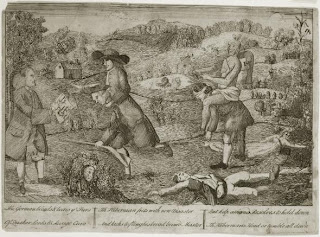 If you look closely, you can see a Quaker (with the broad hat) and an Indian riding literally on the backs on the backcountry residents, while bodies lay strewn on the ground.

Silver's argument is compelling, and it brings me to consider how categories like "the white people" were being formulated in other regions during this time. Or more specifically, since Silver's "white people" are heavily dependent on the existence of Indians, can there be a "white people" without the threat of Indian attack?

My answer is... yes. In the Moravian diaries from Jamaica that I am translating the missionaries begin to use the term "the white people" (die weissen Leute") in 1760 and 1761 -- precisely when slave rebellions were erupting across the island (the rebellions are now known as "Tacky's Revolt"). One of the diarists, Carl Schultz, uses the term "white people" only three or four times in two years, and every time is in direct reference to the rebellion. On May 30, 1760, for example, he writes:

"Not all the white people are being mobilized to stand against the murdering mob etc..."

At another point he writes: "But he didn't meet Mr. Hunnius at home because he had been called to Lacovia where all the white people from this parish are meeting to prepare for a war against the rebelling negroes on this island."

The similarities to the case in Pennsylvania are very suggestive: in both cases, the term "the white people" is mobilized for a specific reason -- to unite disparate European groups who are fearful of attacks from an "other" - either Indian or slave. It is a term of victimization, not of racial supremacy. And once the idea of "white people" has calcified, the question is then: how can it transform polemical rhetoric and political life? In Pennsylvania, "the white people" were invoked for political purposes and the rhetoric had real consequences: Quakers were pushed out of government (well, for a multitude of reasons) Benjamin Franklin lost his seat in the Assembly and later, revolutionary war polemicists attacked the English as savage Indian lovers to mobilize support for Independence.

I don't know whether "the white people" were transformed in a similar way in Jamaica, but it will be interesting to find out!

One final note: I was delighted to see that Silver himself made a Jamaica connection in Our Savage Neighbors. While discussing the anti-Anglo attacks during the American Revolution (when polemicists claimed that the English were aiding the savage Indians), Edward Long, a Jamaica slave owner and author of The History of Jamaica (in which he recounts the events of Tacky's Revolt), bemoans the regrettable association between the English and the Indian, wailing that his "National Character" was "in the utmost danger of being obliterated" (cited on p. 244). As Silver continues, "the most horrific image, even for this former planter, was plainly that of Britons acting as "patrons and abettors of Wanton Homicide," and "stretching forth Cannibal Indians to scalp, tomahawk and torture, with undistinguishing fury."" (244)

Silver goes on to note that it is a testament to the power or rhetoric that Long was so affected in far-away Jamaica. I agree, though I also think that the transference of rhetoric across colonies was significantly commoner than most people assume. And it's my hope that I can keep Silver's story in mind while looking for similar developments in the Caribbean and elsewhere...
Posted by kleinefische at 12:58 PM

Why I'm Writing this Blog

Welcome to the online companion to my dissertation! This blog helps me to organize my thoughts, develop my ideas and hopefully connect with other people out in the ether.

I'm interested in the effect that African slavery had on Christian theology in the early modern period (17th-18th centuries). How did European missionaries react to slavery and how did they integrate it into their theology? I focus on the Quakers, Anglicans and Moravians in my research, but my interests are wide-ranging!